AMPjam was born from a frustration of being unable to attend events in person and connect with the community, its main aim was to bring people together and give fans an opportunity for an exclusive weekend.

The initial weekend featured a series of online talks, studio tours, live drawing sessions, poster drops, gallery openings and more. All of the events involved artists and galleries responsible for creating and selling alternative movie posters. These outstanding works of art are lovingly created by talented designers, illustrators and artists who all share a love of cinema.

Studio Denley worked with the team at AMPjam to create the identity for the conference. Keeping in mind the goal of bringing people together, the identity was developed to represent one thing that artists and fans have in common – the posters themselves.

The logo and resulting identity had to be both recognisable and allow for the range of artistic styles and variety of cinema genres on show. After discussing the poster scene with the AMPjam team, the final logo was created – a minimal icon depicting a rolled poster in a tube. This tongue-in-cheek graphic is a sight familiar to all in the poster community and presented a key starting point to continue the identity.

As the conference was a celebration the identity had to be colourful, playful and have a festival feel. The rolled poster graphic in different states of ‘flat’ forms a pattern of scrolls. The design was created with longevity in mind with the potential of introducing merchandise so people could continue to support the conference in future.

For an online festival, social media is absolutely essential to advertising and attracting attendees. Drawing on learnings through working on other events, such as Birmingham Design Festival, I produced a suite of social media sharing graphics as well as video cards for use on the days. These were used across Facebook, Twitter and Instagram and YouTube. 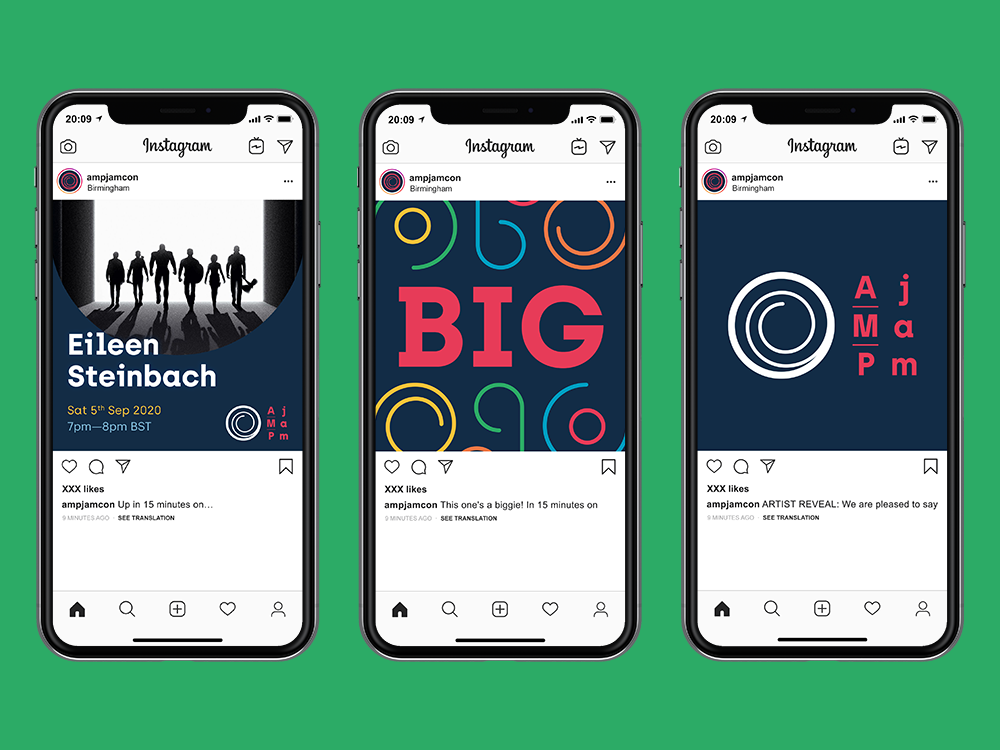 Individual sharing graphics for each of the artists and galleries involved were also produced. Supplying artists with their own graphics generates more awareness by offering participants a ready made social post they would be happy to share. In addition it helps to keep the consistency of the event visuals and create further recognition.

The event was extremely well received, generating engagement from a significant number of viewers across the weekend – and more importantly enjoyed by the artists and fans who attended. It has received attention from notable artists, as well the production company Amblin Entertainment, founded by Steven Speilberg.

Following the positive feedback of the weekend the AMPjam team have made the decision to build on their success and introduce more events to their calendar. A website is in development along with concepts for merchandise including limited edition enamel pins.

See the services I offer and my design beliefs.

Tell me about your project.